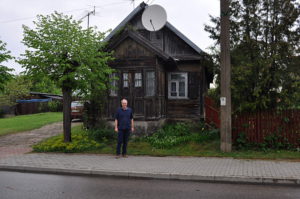 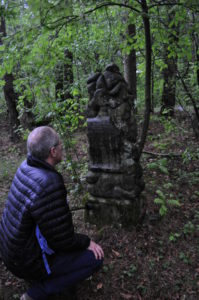 Amir Berger, grandson of Matilda Lerenkind from Bialowieza, the son of Rachel Barchat, born in Bielsk Podlaski, who emigrated to Palestine with his parents, when she was 5 year old, came to Bialowieza on the opening of the Museum of the History of Jews in Bialowieza with his wife Dorit. The day before the opening we were sightseeing Bialowieza – the former village Stoczek. After a conversation in the cafe Walizka, the Jewish shop  before the war, we were walking along the street Waszkiewicza to the family home of Lerenkind family, where Amir’s great grandmother Necha lived. Near the beautiful house (which previously belonged to the family Feldabum who left Bialowieza in the 20s), which still stands today, was located Necha’s restaurant, where the vodka was served with fried herring and snacks from different species of meats. There are only a few stones on the empty square now. We also visited the place of the synagogue and Jewish school. In rain we walked around the Jewish cemetery in Narewka, reading the inscriptions on the tombstones. In the afternoon, we watched old photos and family documents, including letter from 1935 sent by Abram Lerenkind from Bialowieza to his sister Matilda Lerenkind in Palestine.

Amir and his wife also visited Bielsk Podlaski, where his grandfather Chaim Barchat was born and synagogue in Orla. Amir occurred during the opening ceremony of the museum, telling the story of his family. At the end he said that he feels that his arrival in Bialowieza close the circle of his family history. 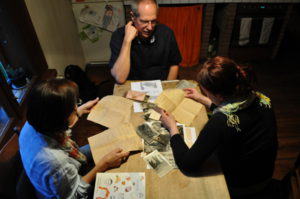