As First World War broke out on the 28th of July 1914, the period of tsar ascendancy over Białowieża and other Polish lands ended.

A number of  Jews and other inhabitants were pressed into the tsar's army [10]. One such drafted soldier was Hershel Feldabaum, born in 1892 in Białowieża, who served in the tsar's army for three years and was sent to the German frontline, where he was taken captive. He remained in Germany after the war, and got married there [11].

It took a year for the war to reach Białowieża. Tsar Nikolai the Second visited the city as late as in June 1915, and the decision to abandon Białowieża was made in August. The Russians took with them most of the palace and church amenities and furnishings, together with historical monuments [2]. They also forced the citizens to evacuate, threatening them with visions of murder, rape and brutal repressions they would suffer at the hands of the Germans. This tragic exodus (pol. bieżeństwo, rus. Беженство) afflicted over three million people, mainly from the western governorates of the Russian Empire; this included the Grodno Governorate to which Białowieża belonged [7]. Piotr Bajko described the exodus with these words:

"On the day of 16th August, the officers of the local forest and hunting administration and the inhabitants of most of the surrounding villages and neighbourhoods were evacuated into Russia's hinterlands. - You could take only as much as would fit on a wagon – recounted Julian Bajko (…). The Białowieża people were selling most of their hard-earned belongings to the local Jews. Some of the families stayed in Białowieża, hiding in the forest for several months" [1].

Jews were also relocated, making up 6,4% of the afflicted [8]. It is certain that some of the Jews from Bielsk Podlaski had to move [12] but we have no clear information about the Białowieża families. Plenty remained, as evidenced by the above information about the purchase of belongings from the fleeing, and later records of Jews being forced to labour for the German occupant (see further sections). Tomasz Wiśniewski mentions that in 1917, during the exodus, there were 80 Jews living in Białowieża, though it is not known on which sources he bases this information [6].

As they left Białowieża, the Cossack army set fire to the buildings – the only village to survive was Podolany, as well as the area between Osocznicy alley and the Palace Park in Stoczek. Half of the Zastawa village was burnt [1]. According to Piotr Bajko, the Russian forces left a small partisan division in the Forest, consisting of around 100 soldiers, whose main task was to distress the Germans. They lived off bison meat, and "they traded the skins and horns with local Jews in exchange for necessities" [1].

The German army entered Białowieża on the 17th of August 1915, and stayed until December 1918. The Białowieża Forest was thus under the occupation of an army government, led by Georg Escherich. Members of the committee and soldiers lived in the Palace buildings and in the Dyrekcyjny Park. Three years of German occupation caused drastic damage to Białowieża Forest, due to massive exploitation in German-built wood-workshops (six lumber mills, excelsior factory, turpentine factory, workshop making carts, shovels, buttstocks, and a powder magazine). To supply them, the Germans built a narrow gauge railroad, and some barracks – today, the settlements Grudki and Czerlonka- to accommodate the workers. Two lumber mills were located in Białowieża (in Stoczek and in Grudki), along with a turpentine factory and three timber yards. The Stoczek factories, officially under the name "Hindenburg Departments", employed close to 1200 professional soldiers, 300 captives and 8000 labourers [1].

The development of local economies came to a halt as Germans confiscated all of the agricultural and foodstuff products, making the people of Białowieża suffer with hunger [10].

The local inhabitants, including Jews, were also forced to work in the forest. As Leon (Lejb) Leyson, a Jewish citizen from Narewka recalls:"During the Great War the German soldiers were quite fair towards the Poles, regardless of their religion. On the other hand, they forced them to work for Germany. My father, [Mosze Lejson] worked for Germans at the narrow gauge railroad, transporting lumber and other things that were to be taken to Germany" [9].

Despite their destructive exploitation of the forest, the Germans dispatched a group of scientists lead by professor Hugo Cowentz to ensure the most valuable part of the forest was excluded from exploitation and put under protection. This was the first step toward the creation of the Białowieża National Park [1]. 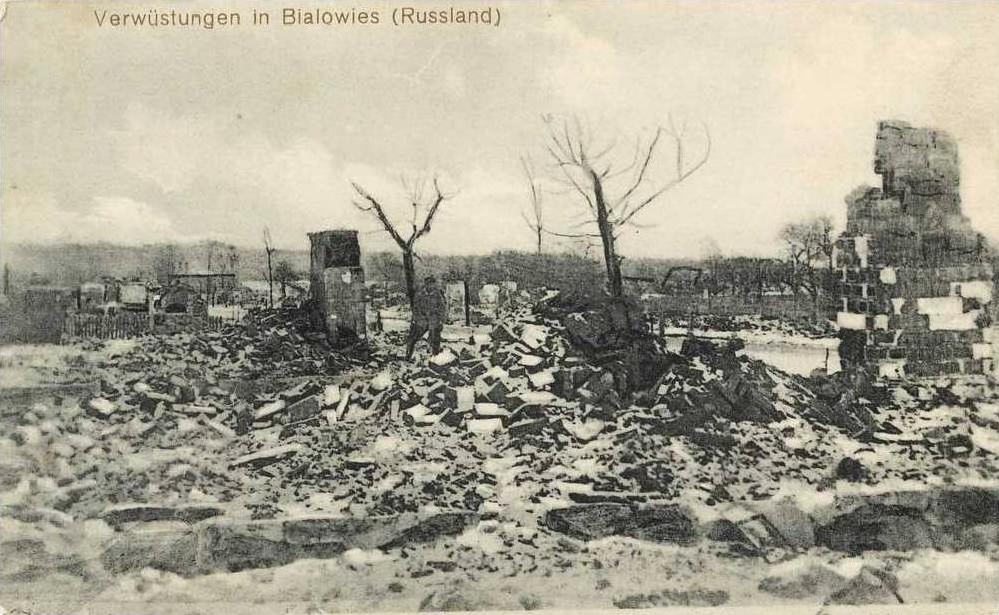 The occupant opened an elementary school for the the children of families who had remained in Białowieża, regardless of their religion (thus including Jews). The school was located in Stoczek in a house which had escaped the fire, belonging to Michał and Eudokia Dulko. The teacher was a young German soldier, whose civilian profession was also teaching, and Maria Milko (later Wołkowycka) from Białowieża was his assistant. It is likely that the children studied in German, just as they did in Narewka [10]. The school functioned until mid-1918 [2]. The Jewish children attended private religious lessons after classes, with melameds as their teachers [3].

The Germans left Białowieża in December 1918, having first destroyed buildings, industrial machines and the tsar's railroad spur. They also pillaged and devastated the main Palace. Quoting the "Short guide through the Białowieża Forest” (Krótki przewodnik po Puszczy Białowieskiej): "When [Germans] left Białowieża at the end of 1918, the village was completely destroyed, the palace was left ragged and stripped of furniture, half of the houses were burnt"  [5].