Monument to the memory of Jews from Białowieża 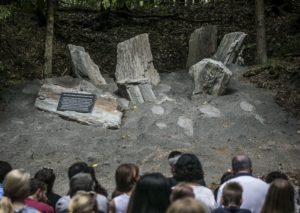 At the same time, Białowieża and Poland do not belong to us exclusively. They are shared. I am convinced that the diversity of the groups that have contributed for centuries, who live here today, feeling their belonging, perceiving it as “theirs” – it does not threaten our homeland, but enriches it. This memorial dedicated to the memory of the Jews of Białowieża, erected today near the Catholic and Orthodox crosses and the Polish eagle, can be a symbol of this. As long as we make a room for it inside of each of us, in our minds and hearts. – said Katarzyna Winiarska on August 11, 2019 in Białowieża, during the ceremony of unveiling the Memorial of the Holocaust of Białowieża Jews Community. 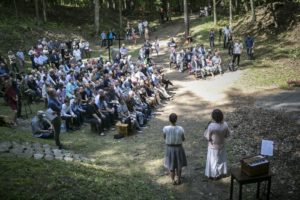 A few hundreds of people, residents of Białowieża and the neighborhood, as well as guests from all around Poland met on 78th anniversary of Białowieża Jews deportation and execution of 77 men selected from this community. Guests together with the descendants of Białowieża Jews were reminiscing that event, praying and crying. The ceremony took place at a former gravel pit, where 77 Jewish men and boys from Białowieża were executed on August 10, 1941 by the German Police Battalion 322. For decades there have been a monument and Catholic and Russian Orthodox crosses commemorating the death of Polish and Belarusian residents in this place and now we have jointly uncovered the Memorial of the Jews from Białowieża murdered during the Holocaust in this place and in Death Camps.

The participants of the ceremony included 30 descendants of Białowieża Jewish families from the USA and Israel: Waldshans, Lerenkinds, Halperins, Feldbaums, Reines. Representatives of each family made speeches on behalf of their families, they were sharing the stories about those who were saved or emigrated because of the war, as well as about those who stayed and died.

Tomasz Cimoszewicz, MP, greeted all participants on behalf of the country, and Włodzimierz Wołkowycki, the head of Białowieża local government, greeted them on behalf of administrative district of Gmina Białowieża. Katarzyna Winiarska from Jacek Kuroń Educational Foundation, the initiator of the monument and the organizer of the whole event, who has been searching for and recollecting the memories of Białowieża Jews for years, told the attendees about the process of Holocaust of the Jews from Białowieża. She also spoke about what happened in that place and about the very few people who survived. Teenagers and children from Białowieża read a few hundreds of names belonging to the people from Bialowieza murdered during the Holocaust, which we managed to identify after a lot of effort. Paweł Winiarski, who was leading the ceremony, read the letter from Michael Schudrich, the Chief Rabbi of Poland, to all the gathered participants. Cantor Symcha Keller sang Psalm 130, the “El Mole Rachmim” prayer (“God Full of Mercy”) and Kaddish was collectively spoken by the descendants’ families under the lead of one of the Michaeli family members (Białowieża Reines family). Families spontaneously joined an artist Elżbieta Rojek from the Foundation team in singing Yiddish “Zog Nit Keyn Mol”, the song of Jewish partisans from the Vilnius ghetto, which is one of the survivors anthem sung all around the world during ceremonies in the memory of the Holocaust. 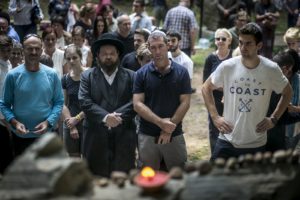 Finally, accompanied by the “Shnirele Perele” song, the ceremony participants put the lights at the bottom of the monument and, according to the Jewish tradition, placed small stones on it. The descendants sang Hatikvah, the anthem of Israel, as well. The memorial, placed on the slope of the gravel pit, was designed by Lech Nowacki, Białowieża resident, the designer of numerous museum exhibitions in Poland. Seven stones is supposed to remind old, bent matzevahs that you can find on hundreds of unkempt Jewish cemeteries across Poland. The stones also resemble people who try to escape the shots and run on the gravel pit slopes. At 12:00, when the ceremony started, sun beams peeped through the trees surrounding the gravel pit bottom and reflected in the largest stone, creating a silver mirror. 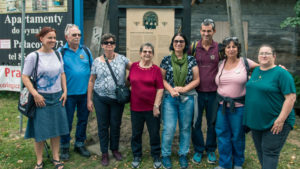 The ceremony was a part of a three-day-long visit of the descendants of Jewish families in Białowieża. It began with a joint Friday Shabbath dinner. On Saturday, after an early-morning trip to watch the wisents, Katarzyna Winiarska was guiding the group around Stoczek for a few hours. Stoczek is the main street of Białowieża, a former village of Stoczek, which was the center of Jewish settlement, there was a synagogue, a school and mikvah, Jewish bakeries, grocery stores, fabric, clothes and hardware stores, tailor’s, hairdresser’s, clockmaker’s, butcher’s and many, many more. The trip started at an information board dedicated to Jewish community in Białowieża, the board has just been placed there, simultaneously with the monument, in order to mark not only the Holocaust, but also the life of Jews in Białowieża. The board includes a group photo of Galpern family, the descendants of this family were among the visiting group. The guests also visited the house of David Waldshan, the survivor, whose wife with children and grandchildren came for the ceremony of unveiling the memorial (David couldn’t come because of his health problems). Next, they visited the house of Jewish Stawski family, it has a mezuzah imprint on the door frame (recently, the Mi Polin artist duo took the impression of it in order to make the mezuzah cast out of bronze), the Stoczek restaurant, former clockmaker’s opposite the store of the richest Jewish merchant Samuel Alkon, the place where a synagogue used to be, and a house that belonged to F 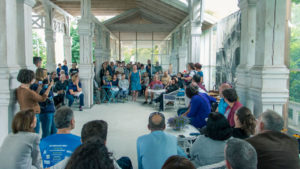 eldbaum family on the cusp of 19th and 20th century, and to Lerenkind family before the World War Two – the descendants of these families took a joint photo in front of the house. The trip ended in Barbara Bańka Atelier, she is a Białowieża painter and the Atelier is a part of a brick-built building with a Jewish history. Basia was waiting for guests there with the gallery of her works and some lemonade. In the afternoon there was a meeting of Jewish families descendants with Białowieża residents, it was held in a beautiful scenery of a restored former tsarist railway station. Visitors shared their memories and talked in a homely atmosphere, over snacks prepared by a local country housewives association “Babska Puszcza”. On Sunday, before the ceremony, there was a trip to a Strict Reserve of Białowieża Forest. After the ceremony of unveiling the memorial, guests were sightseeing a Jewish cemetery in Narewka, which was also a place of Białowieża Jews burial during the interwar period. Finally, the descendants group attended a performance by the youth from Białowieża and the neighborhood – “Neighbors who are no longer here”. It was directed by Joanna Troc and featured young people telling the stories of Jewish neighbors previously collected by Katarzyna Winiarska from the oldest residents.

The event and the monument organized by the Jacek Kuroń Educational Foundation were co-funded by the Forum for Dialogue and The Association of Jewish Historical Institute, as well as by crowdfunding campaign.

Jacek Kuroń Educational Foundation and Katarzyna Winiarska would like to thank all the donors, who contributed to building the memorial and organizing this ceremony by donating money to pomagam.pl/bialowieza crowdfunding campaign and directly to the Foundation account. It couldn’t be organized without your engagement and support.

I would also like to thank all the descendants’ families of the Jewish families from Białowieża, those who came and those, who couldn’t make it. Thank you for being here, for sharing the stories of your families, for conversations and kind words, for supporting the event mentally and financially.

Thank you all, who volunteered to help us build the monument and organize the event:

Lech Nowacki, for designing the memorial and participating in its construction

Tomek Kaczor and Andrzej Szypulski for the photos,

Wojtek Kaniewski for filming the event,

Country Housewives Association “Babska Puszcza” and other Białowieża residents for organizing the meeting of the descendants and locals and for a long-term support, a special word of thanks to Olimpia Pabian, the owner of Bialowieza Palace Station for hosting us in this beautiful place, Grażyna Chyra, Julia Boruszko, Oliwia Hurley, Walentyna Kozak, Małgorzata Tokarska, Lucyna Marciniak and Sławek Droń, Inka and Irek Ruczyńscy, Marta and Wojtek Sobocińscy and Ewa Rutkowska, Marcelina and Grzegorz Zimny, Dorota and Zenek Kruczyńscy and all the residents who helped us at different stages of organization.

I would also like to thank the youth from our drama group for the performance and reading the names during the ceremony as well as Joanna Troc, the director of the play.

Thank-you to the Białowieża Culture Center and Białowieża Volunteer Fire Department, as well as Jurek Chilecki and Irek Ruczyński for tech support during the ceremony,

Barbara and Lidia Bańka for hosting us in the Atelier,

Justyna Kilińska for drawing the maps of Białowieża.

I would like to thank all of you, who came to the ceremony, very often from distant places, who kept fingers crossed for me and supported me with kind word and warm thoughts.